skip to main | skip to sidebar

July 15th was the 32nd anniversary of President Jimmy Carters much maligned "malaise" speech. Funny how History repeats itself.

Posted by Someday at 3:06 PM 5 comments: Links to this post

Posted by Someday at 5:17 PM No comments: Links to this post

I Have Been Away

Obviously.
Welcome back to me :)
Posted by Someday at 4:50 PM No comments: Links to this post

Global Warming.
I was once a proponent of it. Then I became increasingly skeptical, especially after watching the leaders of the global warming movement behave in the face of legitimate criticism. Then the left wing leadership focus grouped and came up with a new term: Climate change. Then Al Gore unwittingly exposed the left's strategy of indoctrinating children against their parents. Then I find out some small island nations are trying to force larger nations with industry to send them money based on the fact that someday they will be under the ocean thanks to the evil actions of these carbon polluters.
It had become increasingly clear to me that climate change policy turns out to be less of a scientific debate, as it has become a way to redistribute wealth from those who earn it to those who do not. Any honest debate has become shut down by the leaders on the left. This will always raise a red flag for me.
Well, it turns out that the "leading global warming" scientists have been caught red handed lying! I mean the emails have been leaked. The ones that document the conspiracy by scientists to mislead us about climate change. And it also turns out that the scientists have admitted that these hacked emails are real, it is not a hoax. Well it turns out climate change is a hoax, but the leaked emails are not.
What does all of this mean to you and me? It means that once again, the leadership on the left has been caught red handed creating a web of lies to manipulate their following into supporting it's agenda of re distributive wealth aka Marxism.
Why must they lie all of the time? Why can't the leadership on the left ever be open and honest about their intentions? Why can't they just admit that they are Marxists. That's what re distributive change is. It's Marxism. The same ideology that has killed more people in the 20th century than any idea in history.
What strikes me as ironic about the policies of the new Marxist left , in practice, if they play out as the leaders of the left hope they will, the US will become a full blown fascist nation. A new version of Communism's longtime sworn enemy. It has already become a fascist leaning nation in the past 15 months or so. They are so hell bent on keeping up the appearance of private ownership that they are forgetting what Italy did under Mussolini. The government seized control of private property, but left it's ownership in the hands of private owners. The owners put in the largest amount of capital, but government made the decisions through regulation and arbitrary policies.
Posted by Someday at 5:04 AM 3 comments: Links to this post

How Much is a Trillion:Video

I have been discussing the vast amount of money that a trillion is, and it's such an incredibly huge sum that no one seems to really be able to get their minds around it. When we say this program will cost us
Posted by Someday at 11:06 AM 1 comment: Links to this post

Why Do Writers and Intellectuals and Artists Always Seem to Fall in Love With Tyrants and Tyrannical Governments? 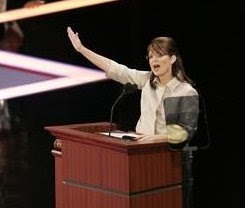 Have you ever noticed the imagery the left produces to describe their opponents? They throw about the word fascist and Hitler and Nazi to describe anyone that they disagree with.
They seem to fear someone like Sarah Palin as a tyrant that would march into Washington and oppress the masses, or create a Christian theocracy. You know, the kind of things she never achieved in Alaska.
Strangely enough, these leftist intellectuals look at actual tyrants with a strange fondness and are happy to pronounce them champions of the people.
Recently they have been going to Cuba to smoke cigars with Fidel Castro and have been returning with glowing reports of what a great leader he is. These intellectuals are blind to the fact that his government controls every aspect of the peoples lives. They control what they read, what they see.
They fawn over Chavez. They make excuses for his takeover of the public media as a necessary step in order to progress forward. Every oppressive thing he does is seen as a great justice on behalf of the people.
They used to treat Stalin the same way. They still hold the greatest murderer the world has even known in the highest esteem. Chairman Mao as they affectionately call him.
Writers and artists fall for these charismatic personalities as if they are blind lemmings happily sheepily dutifully worshipfully praising the tyrants of the world, and anyone that talks about freedom and liberty is a tyrant in their eyes.
Somehow, they are convinced that people that want less government, less governmental control of all of our lives are the oppressors. Oppression by liberty. Who would have guessed? Of course we do have so much in common with those liberty loving Nazis. We like weak government just like Hitler did. We believe all humans are equal, just like Hitler thought. We love free speech and the right to bear arms, just like Hitler did. We dislike government run media just like Hitler did.
In the meant time, they don't see taking property off of one person against their will as stealing. They don't see the redistribution of that private property as a form of tyranny. Taking private property from one person by another person is stealing. If you advocate this, you are in favor of a tyrannical government. You are much closer to a Nazi than I will ever be. Hitler also like to redistribute the wealth. He took from those evil wealthy Jews and spread that around. The Nazi's banned gun ownership.
"National Socialism" is the Nazi party ideology. It basically consists of loose and general criticisms of free markets, enforced by the anti-semantic dogma that Jews are the source of all domestic evils. It's very wavy but is generally against private property, and in favor of absolute state control of the economy. The Nazis aimed towards a system which allowed them to conscribe all labor and distribute all produce - equally - as popular demand insisted it. Well, equally amongst the Aryans and citizens, that is. The anti-semiticism of Nazi nationalism often associated big business and free trade with Jewish movements, which, of course, Nazis viewed as "subversive" to the "rule of the master race".

But us liberty loving people are the Nazis.
Posted by Someday at 7:35 AM 10 comments: Links to this post

Posted using ShareThis
Posted by Someday at 6:18 AM No comments: Links to this post

Are you liberal? Conservative? Libertarian? Click here to find out.

Someday
I am part of the crowd, neither Democrat nor Republican. I am just a Christian man who believes in the words of the founding fathers of the United States. Their words are timeless, just as true today as they were then. I think it is a shame that their words are no longer taught in a school system that seems to have an agenda opposite of their intentions. I genuinely believe I am my brother's keeper, but that I should not force my neighbor to be his brothers keeper through the use of police power.